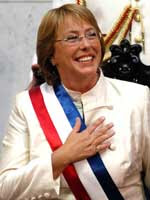 Michèle Bachelet, the first female president of Chile, put her training as a paediatrician to good use on a visit to a Santiago primary school, when an eight-year-old fell faint as a result of a dizzy spell. Señora Bachelet administered first aid and then remarked that it was probably just the late summer heat that affected the wee fella. It might seem a bit crass to point out the contrast between Bachelet and one of her predecessors, who had a penchant for dark glasses and throwing his political opponents out of helicopters (and who had a hand in the murder of her own father) but that Chile has a head of state these days whom you feel you could trust your children with is surely heartening.
Posted by Unknown