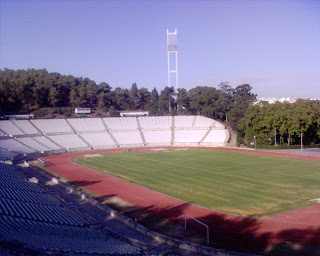 It has been almost a month since my last post and the long-planned slowing-down of this blog has appeared to have been realised. Many people have probably given up on it by now and one or two readers have made queries in person about it so apologies to all for not having signed off in a more graceful way before now. As I had said before the blog, originally started to give me something to write about, has since become a distraction, as has the Internet itself. So, taking advantage of a fortuitous boredom with the WorldWideWeb I have decided to put Underachievement to one side for some time. This is not to say that this is the end of the blog - I will certainly be posting before the end of the year - but such posts will be sporadic. Those smart readers that subscribe to RSS feeds will know when there is life here again.

Such disillusion is not uncommon among bloggers - Sinéad Gleeson, for example put here excellent blog on hold for almost a year - and I may be returning permanently to the fold in the future. But for the moment blogging is not a priority, whereas other writing is, and I will be trying to capitalise on the freedom from posting to do that. The signs were surely there when most of the posts over the past couple of months have been about football and film, the two subjects I find easiest to write about. So, I guess my heart was no longer in it.

Not that I have been lacking in things to enthuse about, such as Anton Corbijn's magnificent Ian Curtis biopic Control, the brilliant novels of the Portuguese writer António Lobo Antunes, whom I have only recently discovered, and a trip I took to Lisbon last week, which I thoroughly enjoyed and which allowed me to watch two excellent matches: Shaktiar Donetsk's 1-0 defeat of Benfica at the Estadio da Luz and Bayern Munich's slick 2-0 victory over a gallant Belenenses side in the UEFA Cup. Of course, while watching the Benfica-Shaktiar game, I missed the dramatic incidents in the other game in that group, where Celtic gained a thrilling 2-1 victory over Milan, only for the result to be put in doubt by Robert McHendry's idiotic antics after Scott McDonald's winning goal. My thoughts were however more on a more famous Celtic win over a Milanese club, that of the 25th of May 1967 when Jock Stein's bhoys beat Inter to take the Champions' Cup. I visited the Estadio Nacional Jamor (pictured) a beautiful, if by now impractical arena a few miles west of Lisbon, where the match took place. It has hardly changed since the day it hosted its biggest ever match (the only time it's ever used these days is for the Portuguese Cup final every year). Here's a snippet of the famous match, where Celtic's champagne football deservedly conquered the sterile negativity of Helenio Herrara's team. Like most football videos posted on YouTube it is marred by an awful soundtrack but it can still bring a tear to your eyes. Best of luck everyone, I'll be back again sometime.