The first 49,000 tickets for the Ireland-France playoff second leg in the Stade de France sold out in hours last week, quicker than I expected. French football fans may have been heeding Raymond Domenech's call not to allow Irish fans to pack out the Stade de France, as they did five years ago (though the number then was no way 45,000, as L'Équipe and some other French media have reported). But it may well be possible that the tickets were being snapped up by opportunists to ultimately pass on to Irish fans for a handsome profit. Almost every Irish person (or even internationals supporting Ireland) I know bought the maximum four tickets. Whether this translates into a heavy Irish presence is unclear, as the French Football Federation appears resolute that the FAI's official allocation will remain at the minimum 8,500. There are 20,000 others reserved for football bodies within France and commercial partners - I noticed tickets being offered though my own place of work - and it's safe to say that some of these will end up in Irish hands too.

Speaking of opportunists one chap who arrived at Leclerc (a supermarket) in Val-de-Marne on his day off from said shop and produced a list of 80 'friends' whom he bought tickets for, ahead of everyone else in the queue. A disgruntled punter caught it on film (though it has since been taken down) and the french blogosphere is indignant. One wonders where his friends are going to be on the night of the 18th of November.

As for myself, what I previously thought was a non-negotiable work day turned out to be more flexible so I will be in the stands on the night, accompanied by a recalitrant Canadian who is insisting on supporting France. I'll get my revenge during the ice hockey at next year's Winter Olympics.

The Death of Gearóid Walsh

Sad news yesterday on the death of Irish backpacker Gearóid Walsh in Sydney following a late-night fight. But this report from the Sydney Morning Herald is humbling in how it shows the forgiveness and complete lack of bitterness of Gearóid's mother Tressa, who says she doesn't want her son's killer to go to prison. While it was clearly not an attack of such viciousness as often makes the news, the calm of Tressa Walsh in reacting to such a tragedy is admirable. The SMH reports a man has turned himself into police; I don't know if Australian law takes into account pleas for clemency but it would be best for all if Tressa Walsh's words were heeded. 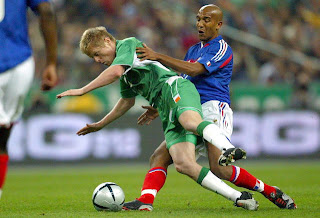 I had a premonition we were going to end up playing France in the play-off for a World Cup final spot. I can't say I'm too disappointed with it either, even though an open draw for the play-offs would have been infinitely fairer, but FIFA just couldn't countenance big names (and big TV audiences) missing out on the finals. To expect fairness from the corrupt suits in Zurich would be akin to expecting a Catholic Church float at Gay Pride so we'll just have to live with that. By most reckoning Russia would have been far worse what with playing in Moscow in November, on a plastic pitch, against a side that is significantly fitter and more motivated than most others in Europe right now. I think Portugal and Greece would have been well within our reach but I could see the latter being the sort of team capable of bogging us down and taking the sharpness off the big-game appetite. A needle match with France is all the better.
And if France, their current disarray notwithstanding, might be a formidable opponent for us, they didn't want to get us either. They have unbeaten records against Ukraine, Slovenia and Bosnia and would have preferred either of them. Of those three only Ukraine would be a real threat, and even then they are temperamental in the extreme. Bosnia are an exciting up-and-coming team but the fact they could only take one point off Spain and Turkey, the two big teams in their group, shows they are not really up to this level just yet. Before the draw was made L'Équipe said Ireland was the team to avoid, above all with a return leg in Dublin. Well, they got the consolation prize of the second leg in the Stade de France. Irish fans who have watched the mind-numbingly poor performances of Trap's boys in green so far will be bewildered at this wariness. But France have been equally poor in a group that was arguably worse than ours. Only recently, with the supposed mutiny led by Thierry Henry have they gelled and begun to play with something approaching a team spirit. That said one can only describe their draw away to Serbia as an impressive performance. That Karim Benzema could say he wasn't trying his hardest in the home draw against Romania suggests there's a long way to go to building a talented bunch in players into a footballing machine to be really feared. And most French football commentators and fans were not exposed to our performances in a mediocre group where we failed to beat anyone but Georgia and Cyprus. They just see the two draws with Italy, two games in which we acquitted ourselves well but could also have done better in. They are also fully aware that in Trapattoni, we are blessed with a manager who towers above their own hapless steward Raymond Domenech.

That said, it would be a silly fantasy to think that France are quaking in their boots at the prospect of a two-legged tie against Ireland. Overall they have the better players, and if Yohann Gourcuff and Jérémie Toulalan are both fit, a central midfield that could put worrying pressure on our own central formation. Much will depend on whether Thierry Henry goes into hiding for a big game (as he did in the Stade de France in October 2004) or delivers the goods (as he did a year later at Lansdowne). André-Pierre Gignac has scored four goals in his first eight internationals but three of those were against the Faroe Islands; there's no guarantee yet he won't turn out to be another Stéphane Guivarc'h, handy in Ligue 1 but out of his depth elsewhere. At the back France are not as solid as they were when they beat us four years ago (the real matchwinner that night was Lilian Thuram whose superb second-half performance calmed nerves after a first period when it looked the game was going Ireland's way) and they have an alarming tendency to concede goals from dead-ball situations. Which suits us fine, as we find it hard to score any other way. Richard Dunne's recent proflicness from corners and free kicks in particular has already been mentioned by the French press. In between the posts, Hugo Lloris and Steve Mandanda have been far from reassuring in recent matches for the national team or Lyon and Marseille respectively, and we can definitely put pressure on them.

The two ties are unlikely to yield many goals and Ireland's prospects rest on our level of organisation. After the catastrophic Staunton era, many gaps have been plugged but we still have a tendency to lapses in concentration at the wrong time. Far too many of the eight goals we conceded in the group matches came from unforced errors. Likewise, the two Italy games aside, there was little imagination in our forward play. We have to accept that, in the absence of Steve Finnan, we have no fullback really capable of outstripping on the flanks, and the centre of the field lacks an industrial pivot such as Steven Reid or the assertiveness of Stephen Ireland. At this point of the tournament, Trap's sidelining of Andy Reid, who had a fine game in our last meeting with France, looks ever more foolish. What goals we do score are likely to come from set-plays and if we do manage to put France on the back-foot it will probably be while chasing a lead.

Raymond Domenech, one of the least popular men in France these days, has riled the Irish by allegedly calling Ireland "a sort of England B-team", or so the Examiner reports. I've read the original French interview though and he said Ireland are 'Angleterre bis' which means rather a fascimile or replica of England; if anything it's a compliment more than anything else. But Domenech showed in the run-up to the Lansdowne match four years ago that he was a man of little or no class, and he will undoubtedly intentionally provoke the Irish before the 14th of November. Which is of course all the better for us. He is also worried that Ireland will hog the tickets at the Stade de France and make it effectively a home game for the Irish and he called on French supporters to snap them up quick. Thankfully French football fans are not too keen on indulging Mr Domenech. Irish fans should have no problem getting their hands on tickets when they come free, either via the French Football Federation or FNAC. Unfortunately non-negotiable work commitments mean I can't make the Paris game but I will thankfully be able to keep a close eye on it.

Domenech also has some previous with Marco Tardelli. Both men faced off as managers of Italy and France in an under-21 match in 1999 that was also a qualifier for the Sydney Olympics. It was a bad-tempered return leg, won by the Italians, and Domenech has since claimed that the Italians bought the referee, for which he was admonished by FIFA in 2007. Tardelli was asked in today's L'Équipe if he would shake Domenech's Hand; he replied coyly, 'he's not my opposite number, it's Trapattoni that shakes the hand of the opposing manager.' And there's me worried about FIFA encouraging a referee in the second leg to ease France's passage to South Africa.