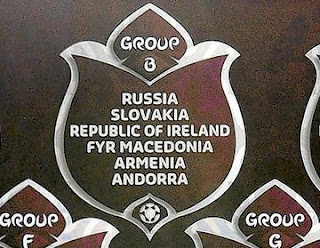 There's an air of the consolation prize about Ireland's Group B draw for the Euro 2012 qualifiers; perhaps this is what Sepp Blatter meant by the 'moral recompense' that was due us for suffering Thierry Henry's creative machinations last November. It's probably the best possible draw we could have expected as a third seed. Russia are most definitely the least fearsome of the top seeds and they have been unable to build on the promise of their Euro 2008 performance. True, Moscow in winter and the Luzhniki plastic pitch will present problems but if Guus Hiddink departs, as expected in July, I expect the Russians to revert to their usual febrile selves. Taking four points off them is well possible.

Slovakia took full advantage of a winnable, evenly-matched group to qualify for South Africa, their first ever finals as an independent country. How good they are is hard to gauge. Even under Stephen Staunton's shambolic reign Ireland were good enough to beat them in Dublin and almost repeat the trick in Bratislava. It probably would be a good idea to get the away game out of the way early in the campaign. Macedonia will send shivers up the spine of us all after the 3-2 defeat in 2007 and the last-minute goal two years later that cost us our place at Euro 2000. Avoiding the sweltering autumn and summer temperatures in Skopje will be paramount, even if we should fancy our chances. We will play Armenia for the first time, and Andorra for the second. At the risk of sounding cocky you would be expected to have twelve points there. It's not a terribly glamorous draw and the FAI won't be too enamoured of the task of putting bums on seats to watch Ireland play Armenia or Slovakia. But it gives us our best chance in years of winning a group. 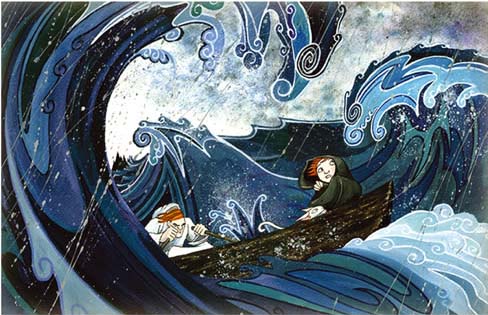 A rare plug here for the Hollywood self-congratulation fest, the Oscars, only really because of the unprecedented presence of three Irish films among the nominations, Granny O'Grimm's Sleeping Beauty in the Best Animated Short category and The Door for Best Short. And there was also a welcome surprise, Tomm Moore's The Secret of Kells. I saw the film last year here in Paris, where it did reasonable enough business during the Easter holidays. Unfortunately I saw it in a dubbed version (it's a Franco-Belgo-Irish coproduction) so I missed having the pleasure of hearing Mick Lally and Brendan Gleeson voicing cartoons. It's a superbly animated and thoroughly enjoyable film that fully deserves a big audience; it doesn't go on release in the States until April. It's unlikely that it will be able to see off the big guns such as Up, Fantastic Mister Fox or Coraline but Gunn and Kilkenny's Cartoon Saloon should get well established as a result of the publicity.

There were also Irish success stories within the machine with Ballyfermot alumnus Richard Beneham up for Best Visual Effects for Avatar and Peter Devlin for his sound work on Star Trek. This year the Academy has reverted to his original format of selecting ten films for best picture, presumably to allow five extra middle-brow movies with fine notions to claim some dubious prestige. The result is rather lopsided but it does at least allow some consolation to the scandalously overlooked A Serious Man, which garnered only one other nomination. It's probably a better film than either Fargo or No Country for Old Men, hitherto the Coens' most successful at the Oscars. But then again, what does the Academy know? (The nominations also remind me to finally watch The Hurt Locker; critically acclaimed though a friend of mine who has worked as a journalist in Iraq says it's rather risible, comparing it unfavourably to Generation Kill.)

Here's the trailer for The Secret of Kells: 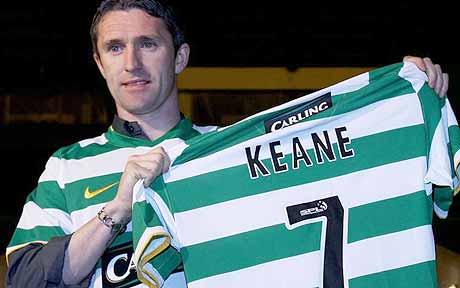 Robbie Keane goes to Celtic. I should be excited about this but I can't really be arsed. I just can't really see the point; of course he might provide the edge to help pull back the ten-point deficit and I can see him bullying Scottish defences in a Kris Boyd-like manner (you could probably get decent odds on him hitting twenty goals by the end of the season). But, in the absence of European football, his true usefulness is questionable. Especially if he's back at White Hart Lane in June.

Update: A 1-0 defeat to the Killie at Rugby Park with the new boy on board now threatens to make his coming ever the more pointless... 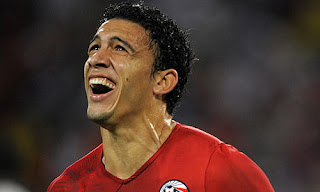 And there was the final of the Africa Cup of Nations too, or the CAN as the French call it (doing likewise in English can give rise to some inelegant locutions such as 'being on the CAN for three weeks'). This year's tournament in Angola was, by most accounts, a disappointing one. I say 'by most accounts' because I saw little of it until the quarter-final stage. In France, the CAN is ring-fenced, rather unfairly by the cable channel Orange Sport, an annoyance for many football fans in the European country that cares most about the tournament. There were 68 French-based players in Angola, almost three times more than the next biggest representation, and nine of the 16 competing nations were former French colonies. Not surprisingly, there are few Ligue 1 managers that dare moan about losing their players to a competition played mid-season.

Togo are still reeling from the CAF's absurd decision to ban them from the next two tournaments because their withdrawal from this year's one following the Cabinda shooting was done because of governmental interference. As unjust and ridiculous as this decision is - not to mention insensitive - I'm not terribly surprised. The Togolese government was rather public in its requesting its team to return home for three days of mourning, as it had every right to be, and I could see the suits in the CAF bridling at this. FIFA and its minion affiliates like to invoke this division of government and football as if it were as worthy or undeniably ethical as the separation of church and state. There are, of course, good reasons to keep governments' mitts out of football but sometimes FIFA's motives seem more like eluding scrutiny of its own questionable practices. Besides, as L'Equipe commented yesterday, government interference in African football is practically de rigueur and if one were to indulge it in lesser instances, why not do so after a tragedy such as befell the Togo team? But I tire of expecting decency from football administrators anywhere, not least the sort whose first reaction to the attack on the Togo delegation was to condemn them for allegedly failing to observe security measures.
After all this, Egypt trotted out winners once again, sneaking a sly victory over Ghana thanks to a fine late goal from supersub Gedo, his fifth in the tournament. Hassan Shehata has fashioned the Pharaohs into an Arab version of the Germany of old: a formidable, well-marshalled, powerful outfit endowed with the mental strength to soak up pressure and strike at the vital moment. In the bar on boulevard St-Martin, where I watched the final, everyone, be they sub-Sahran or North African was cheering Ghana on, for any number of reasons, I imagine. But all were admiring of the Egyptian smash-and-grab, a mark of true professionalism. Egypt have been lucky in the tournament, with an appalling refereeing decision gifting them a non-existent goal to kill off Cameroon in the quarter-finals. Over the 90 minutes Cameroon had looked the better team. Ghana similarly passed the ball with far greater fluidity but the Black Stars rarely looked like making the breakthrough, relying far too much on strikes from distance. A goal at the other end always looked a possibility, given the swiftness of the Egyptian breaks and it probably would have come in extra time if Gedo hadn't played that sharp one-two with Mohammed Zidan and coolly placed the ball beyond Richard Kingson's reach.
Now that, with three titles on the trot and with half a dozen players featuring on all three occasions, the Egyptians can be conclusively proven to be a better side than any of the six African representatives at this year's World Cup, one wonders what might have happened if they got there. We got a glimpse at last year's Confederations Cup, where the Pharaohs gave a good account of themselves, losing narrowly to Brazil and beating Italy before collapsing, alarmingly, against the United States when they were on the brink of the semi-finals. We'll never know, and Egypt will have to keep up the momentum and try to make it to Brazil in four years' time. As for Ghana, their stylish play will be welcome at the World Cup, even if a tough group involving Serbia, Australia and Germany might be too tall a task for their enthusiastic youngsters.
Posted by Unknown 3 comments

Lord, I hate Real Madrid but I have to salute the majesty of this barnstormingly brilliant set-up from Guti for Karim Benzema in the Riazor last Saturday night. Quixotic in its excellence to search out a teammate running behind when it would have been easier to score. Of course, had it not come off, we'd all be frowning disapprovingly at a wanton piece of showboating. But it did and we have this goal that even a confirmed antimadridista like myself can appreciate. Ludique is what a French intellectual might call this. Call it what you want...