What I Learned Today III 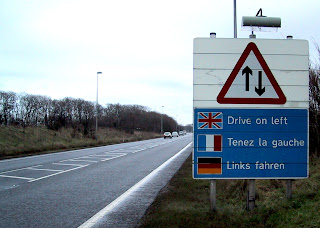 That far from being a minority activity, driving on the left is the convention in no less than seventy-four countries. The best-known, of course, are the UK, Ireland, Japan, Australia and New Zealand, but there is also the entire Indian sub-continent, all other former British colonies and, strangely enough, former Dutch colonies, including Indonesia and Surinam. A full list is available here, along with an interesting potted history of why certain countries drive on the left. The idea Alan Partridge once had of a TV show called 'Around the World on the Left' now appears feasible.
Posted by Unknown