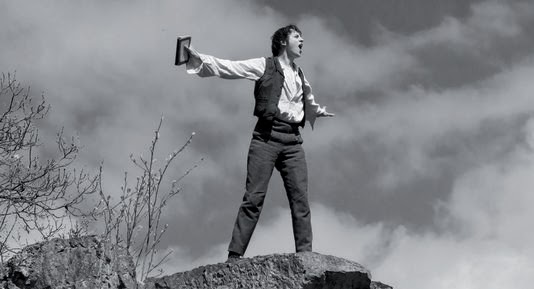 Edgar Reitz’s monumental TV series Heimat, which spans much of the German twentieth century and which has been running since 1984, is a major lacuna in my film-watching, and one I intend to finally get around to one of these days. Not that any knowledge of the TV show is necessary to appreciate this four-hour prequel, which is set in the same Rheinland village of Schabbach and centres around the same family, the Simons, that appears in the show. The action is set several decades before the start of the TV series, in 1842, in a region that has yet to be industrialised and where the only hope for many is to up sticks and move to Brazil, where the Emperor has reserved the southern regions of Rio Grande do Sul for German immigrants.

Jakob Simon (Jan Schneider), a bookish youngster, is one person who dreams of an escape, going so far as to learn the Tupi languages of the Brazilian natives, which he has never even heard. Jakob is scorned by his blacksmith father Johann (Rüdiger Kreise), who sees him as a feckless n’er-do-well, in contrast to his older brother, Gustav (Maximilian Scheidt), who returns from military service as the film begins. Johann’s intransigence has driven away his daughter, disowned for marrying a Catholic, much to the chagrin of his wife Margarethe (Marita Breur), who also encourages Jakob in his studies. Jakob though is destined to be forever upstaged by his more assertive brother, who steals the woman he loves, Jettchen (Antonia Bill) and soon begins to muscle in on his dreams.

In one sense, Heimat is solidly old-fashioned film-making – a seamless fresco of nineteenth-century life, a family saga, a portrait of an embryonic modern society. Like Michael Haneke’s The White Ribbon, the film takes its visual cues from the photography of August Sander (it is striking how similar the two films look, despite being set some seventy years apart); Gernot Roll’s stunning high-contrast cinematography is monochrome throughout with a few key colorised elements interspersed – an incandescent horseshoe, a field of bluebells, a sliver of agate. Reitz has little time for Haneke’s determinism though – the historical aspects of his film are portrayed dispassionately: the legacy of the Napoleonic invasion (and even the 30 Year War, two centuries past, evoked by Jakob’s elderly uncle), the rise of German nationalism, embodied in a boozy group of students who invite Jakob on a raft trip down the Rhine, ultimately radicalising him.

Though Heimat the TV series has been criticised for soft-pedalling the Weimar and Nazi era, Reitz’s depiction of the premodern society in this film is far from the idealised image of the Volk that the Nazis and Prussian nationalists liked to peddle. Life in Schabbach is miserable, its old artisanal society barely subsisting; the region is riven by famine and the village is emptying at a rapid pace, with even the local schoolmaster eyeing a spot on the boat to Brazil. In one of the many powerful sequences in the film, the villagers hold a communal funeral for a dozen infants carried away by diphtheria in the bitterly cold winter, the ground being too frozen solid to bury them until the spring. Reitz is also adept at integrating period detail into his narrative in a way that is fully organic – the sudden halting of a creaking loom alerts the family to the death of its operator and the appearance of a steam engine in the forge – built by Gustav and perfected by Jakob – points to the industrialisation that is about to send the region, and all of Germany, hurtling into modernity.

This latest chapter in the Heimat saga is a wonderfully rich experience, lucid and intelligent, endowed with some masterful filmmaking, and it is at times deeply moving. Reitz presents a sophisticated portrait of the mid-nineteenth century while being more than simply tasteful picturesque. Though the film stands alone admirably well, you wonder does Reitz intend filling in more gaps with further prequels, even if, at the age of 81, he may find time is against him.

The bulk of Claude Lanzmann’s new film consists of interviews he conducted over a week in 1975 with Benjamin Murmelstein, the former Chief Rabbi of Vienna, and later the Head of the Jewish council in the notorious ghetto of Theriesenstadt during the Holocaust. Lanzmann omitted the interviews from the final cut of Shoah, for which they were filmed, because it would have added unduly to an already marathon length. Three decades on from Shoah, Lanzmann has decided Murmelstein and the grotesque story of Theriesenstadt merits a film of its own, one that, at just under four hours, runs to almost half its predecessor’s running time.

The title of the film comes from Murmelstein himself, who described himself as such, in self-deprecation, given the opprobrium he faced in both Israel and among international Jewry following the war (the philosopher Gershom Scholem said he ought to be hanged). Theriesenstadt, a concentration camp located in the Czech fortress town of Terezin, has become a byword for barbaric repression airbrushed by good public relations. It was the brainchild of Adolf Eichmann, and was filmed for Nazi propaganda and called ‘The Fuhrer’s Gift to the Jews’, presented to the world as a place of comfort for its inhabitants, despite 60,000 Jews living in an area intended for 7,000. Murmelstein, who liaised with Eichmann in the ghetto, was tried for collaboration in Czechoslovakia after the war but was acquitted and released after 18 months in prison. He ended up a furniture salesman in Rome and, such was his fall from grace, the Chief Rabbi of Rome refused him burial beside his wife in consecrated ground when he died in 1989.

Given he was a community leader (and moreover one who passed up opportunities to abandon Vienna’s Jews when offered work in London upon Anschluss) it was ridiculous that Murmelstein be retrospectively cast as a kapo. He may indeed have been too trusting of Eichmann, despite clear signs of the latter’s brutality – Murmelstein witnessed him leading the destruction of a synagogue in Vienna before the war – but Murmelstein insisted he did everything to save as many Jews as he could. He even says in the film that the embellishment of Theriesenstadt for publicity purposes helped saved lives as, he reasoned, if the Jews in the ghetto were in the public eye, they were less likely to be slaughtered. Not that this spared the lives of those who were put to death after a series of failed uprisings, mind. Murmelstein was, then, one of the Jewish leaders at whom Hannah Arendt took aim, when she said fewer Jews might have been killed had they not had community leaders to place trust in. This is one of two issues in which the film takes issue with Arendt, the other being the famous ‘banality of evil’ applied to Eichmann. Murmelstein, who knew Eichmann better than most (and was, inexplicably, never called as a witness for Eichmann’s trial), says Eichmann was the consummate Nazi, fully aware of the enormity of his enterprise and implicated in more than simply the logistics.

Lanzmann’s film is, for one of those length and such unremitting grimness, incredibly compelling. As in Shoah, he has a keen ability to make the past come to life simply by filming the same locations decades later – in one chilling scene, he recounts, by reading from Murmelstein’s 1961 memoir, the executions of Jewish insurgents in the very same hangar in Theriesenstadt. The only thing against The Last of the Unjust is it is a little too complicit and sympathetic towards its subject – it lacks the dialectical force that made Shoah such a formidable, if at times selective, film. You see relatively little of the abrasive, conceited, and often unpleasant, side of Lanzmann’s character, which helped him coax so many fantastic interviews out of unsuspecting interlocutors in the earlier film. Similarly, Murmelstein’s story is very much an annex to Shoah, which renders The Last of the Unjust a quasi-theological film for specialists of the field. While it is remarkable in many ways, it is a film that can really only be grasped in its entirety by those that have sat through the entire nine-and-a-half hours of Lanzmann’s earlier masterpiece.