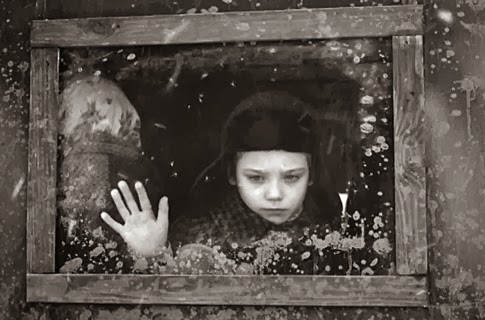 Salvo (Saleh Bakri) is a Palermo hit man, meticulous and redoubtable, the sort who you can be assured will track you down. We first see him and his mob boss Randisi (Mario Pupella) anticipate a two-pronged ambush and finish off every last one of their assailants with aplomb. It’s carried out with unnerving, calculated calm, as clinical as a Christiano Ronaldo hat-trick against Sicilian landscape dun and battered in Daniele Ciprì’s bleached-out photography. Next up for the young killer is an equally youthful gangster who has crossed Salvo’s boss. Salvo lays in waiting for him at the man’s grotty beachfront tenement. The only problem is the prey’s blind sister, Rita (Sara Serraiocco) is also there. This is where the complication arises.

The protracted scene in which Salvo both pursues and hides from Rita is brilliantly claustrophobic, filmed literally à l’épaule, akin to the climax of Silence of the Lambs, even though in this case the film is only beginning. A consummate professional, Salvo finishes off his contract but spares the girl, the first apparent crack in his impervious façade. Salvo takes Rita to a safe house in an abandoned mine, as she is being pursued by Randisi, because she appeared to know more than she lets on about her brother’s operation. Salvo also takes to playing the cheesy love song on loop that Rita was listening to when he first encountered her, drawing derision from his macho colleagues.

Fabio Grassadonia and Antonio Piazza’s film has been compared to Jean-Pierre Meville’s late work, particularly Le Samouraï. This is largely because of the sparseness of the dialogue (just as well, as Bakri – a Palestinian – would no doubt have had an overly-telling accent) and the directors pace the action with a similar ease. Salvo lacks Melville’s existential urgency though and it is unlikely the French master would have given too much sway to sentiment, which is what ultimately bogs this film down. The film doesn’t collapse as a result of a blossoming relationship between Salvo and Rita – and despite initial resemblance to Luc Besson’s Leon, it is a far more substantial work ­– but it does peter out. There is just not much you can do with a temperamental switch like this when the film has been so cool and distant for much of its length. Then again, Salvo’s structural impasse may appositely reflect the corner its two heroes find themselves backed into. It is an impressive enough of a feature debut from Grassadonia and Piazza and speaks to the current rude health of Italian cinema but you get the sense that Salvo is a film that winds up being frustratingly undercooked.


At a Q&A session with the great Belá Tarr I attended a couple of years ago, the Hungarian director sidestepped a comparison between his work and Tarkovsky, by saying "in Tarkovsky’s films, the rain cleanses; in mine, it just turns to mud." The rain in Eva Neymann’s House with a Turret performs similar mud-producing tasks, even if the film is based on a short story by Fridrikh Gohrenshtein, the screenwriter of Solaris, and Neymann’s morose style is much more Tarkovsky than Tarr.

In wartime Russia, in 1944, an eight-year-old boy takes a train home to his grandfather’s house, with his ailing mother (Yekaterina Golubeva, a veteran of films by Sharunas Bartas, Claire Denis and Leos Carax, and who was herself in her last days before her early death from cancer in 2011). He is separated from his mother along the way when she is removed to a ramshackle hospital. When she dies, he is left in the charge of his indifferent aunt and feckless uncle, who bring him the rest of the way.

House with a Turret is simultaneously impressive and jaded-looking. The reconstruction of wartime privation and desperation is both deft and rich and Lithaunian director of photography Rimmvydas Leipus’s monochrome images shimmer atmospherically. Dmitriy Kobetskoy incarnates superbly the hunger and determination of the unnamed main character, and despite the film’s relatively short length, you get a clear sense of the scale and interminable nature of the Soviet experience of World War II (or ‘The Great Patriotic War’, as it continues to be known in Russia). So what’s the problem then? Well, if Neymann’s film looks timeless, it is not so much a compliment as an admission that we have seen it all before. It could really have been made any year since 1944. Its constituent qualities are undeniable but much of it looks like it has been culled from Soviet and Russian cinema of the past. When a gruff and brutish yet good-hearted soldier muscles in on the train compartment with his blind comrade, it’s a portrait of Russian man that is no doubt rooted in reality but nonetheless a fall-back for many makers of Soviet and post-Soviet cinema.


Catalan directors are quite a different bunch from other Spaniards, pursuing a more streamlined, formally experimental cinema. Jaime Rosales, José Luís Guerín and Marc Recha are all light years away from the super-abundant aesthetics of Almodóvar, Alex de la Iglesia, Julio Medem or the more earnest concerns of Fernando León de Aranoa and Alejandro Aménabar. No Catalan director is as ‘out there’ however as Albert Serra. The 37-year-old is the new standard-bearer for recondite, demanding cinema, the heir to the late Raúl Ruiz. His films, shot on low-grade digital video with tiny budgets, interrogate the formalised, picturesque portrayal of the past in cinema while managing to be surprisingly beautiful themselves.

Story of My Death is a diptych of sorts, the two parts only vaguely linked, which retell the histories of Casanova and Dracula, two avatars of extreme decadent dandyism. We first see Casanova’s court, a place given over entirely to pleasure – eating, drinking, fucking, and, in one thoroughly disconcerting sequence, shitting – overseen by the ageing goat (Vincenç Altaió) who hides his baldness under a perruque. His is a portrait of a man whose Enlightenment certitude and brazenness is about to give way to doubt and old age (he remarks at one point that he met Voltaire once and ‘it didn’t end well’.)

Casanova yields, in both a narrative and physical sense, to Dracula, similarly unnamed and appearing without the trappings bestowed on Bram Stoker’s creation by Tod Browning’s Universal Studios adaptation. Serra’s Count is charismatic but menacing, as much a cannibal as a seducer; he is avowedly anti-Christian, telling one of the young ladies he preys on that there is no place for Christ in his house. Story of My Death is a historical dialogue between two personages, one real and one fictional, whose characters both overlap and conflict. Despite Serra’s wilfully cheap aesthetic, his images are bestowed with an immense force, the early banquet scenes clearly modelled on Flemish still-lifes, and the later ones carry the nebulous ambience of German Romantic painting. It has to be said that Serra is never likely to reach too wide an audience – his films are far too unyielding in their rhythms and their disregard for story and plot – but for those who have a high tolerance for uncompromising primitivist art cinema, he is well worth discovering.