It’s the Earth, not the Moon – Gonçalo Tocha 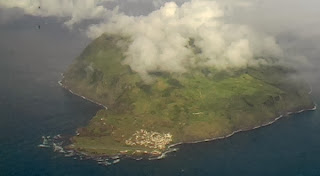 Gonçalo Tocha and his sound engineer Didio Pestana arrive in Corvo, the smallest island of the Azores, 6 km by 4, population 440, with the intention of filming ‘everything we can, we will try to be everywhere at the same time and not miss a thing…we will try to meet everyone, to film every face, every service, every house, every street, every workplace, every corner of the island, every tree, every rock, every bird.’ The French sailor who takes them to the island says ‘the Azores are crazy and on Corvo, they’re even crazier’ (someone else says during the film that other Azoreans consider Corvo to be backward), but there is little evidence of any egregious eccentricity. If anything, Tocha’s film presents the island as such an ordinary society cast in extraordinary surroundings that at times you begin to question his motivation for making a documentary in such minute detail. We should be glad he did as It’s the Earth, not the Moon is one of the finest observational documentaries in recent years, an absorbing portrait of everyday life. Its punishing length and austere style (there are no captions and few recourses to voiceover) has led some to call it a ‘micro-epic’; there will be some for whom it is the hardest of films to watch, others will find it the easiest.

Tocha eschews anything that might give a noticeable timeline to proceedings and it is not always obvious the filming takes place over several visits over the course of a few years from 2007 to 2011. The film’s 14 chapters are interspersed with scenes of an elderly islander Inês Inêz knitting Tocha an old-fashioned whaler’s bonnet. This is one of several instances of manual labour documented in the film – and one that Inêz regrets is about to die out as the younger generation have no interest in it – others include fishing, slaughtering pigs, cattle-herding, Inêz’s husband crafting wooden bolt locks. Some of these crafts are more or less obsolete, now being processed on an industrial scale. It’s a wry avowal of artifice that carries (possibly unintentional) echoes of Robert Flaherty reintroducing the defunct basking-shark fishing to the Aran Islands to include in Man of Aran.

It’s the Earth, not the Moon has this wryness throughout. Tocha is almost always off-screen but is regularly addressed by the islanders, and his presence informs the action. The lightness of tone reminds you of Miguel Gomes’ wonderful Our Beloved Month of August. We meet members of a theatre troupe set up by Americans that has for some reason stopped off in Corvo, a German music teacher who wanted to get as far from home as possible without leaving Europe, the Portuguese Monarchist Party – marginal nationwide but a local force on Corvo – and, finally, a group of British birdwatchers. Tocha quickly gives up on his encyclopaedic intent but there is still an obsessive attention to the details of life on this tiny island. It is as if Tocha is providing his own canon for Corvo, which has little or no written documentation existing from its five centuries of human habitation. Until the last thirty years, the island was cut off even from other islands in the archipelago and it was only the arrival of an airstrip in 1983 that opened it up to the outside world. One of the few documents Tocha finds is shown him by a local archivist – a report from the Lisbon press in the early 1970s, which carried the headline ‘It’s the Earth, not the Moon’. It’s a suitably oblique title for a film that is gently exhaustive and which makes a small remote community a subject of the greatest importance. If Tocha’s film were a person, you would go out of your way to become its friend. A brilliant, mesmerising and lovingly warm film.
Posted by Unknown