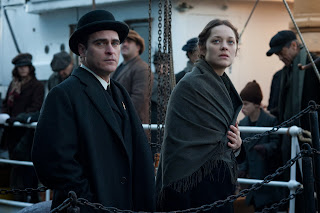 James Gray’s first foray into period drama stays in New York – in a similar working-class milieu to his previous work, though this time set on Manhattan’s Lower West Side rather than the far reaches of Brooklyn. Marion Cotillard plays Ewa Cybulski, a young Silesian immigrant who is separated from her consumptive sister, Magda (Angela Sarafyan) at Ellis Island in 1921, and listed for deportation on account of charges of prostitution on the passage over. She is saved by Bruno Weiss (Joaquin Phoenix), a suave yet shifty New Yorker, who bribes an immigration official to get her out and who offers her work and promises that she will ultimately be reunited with Magda.

It comes as little surprise to learn that the work is prostitution, which the devoutly Catholic Ewa – still professing her innocence of the accusations of low morals – tries to escape but she is thrown out by her aunt and uncle in Greenpoint when they learn of the rumours. She is ‘rescued’ once again by Bruno, who brings her back to Manhattan and keeps her indentured, even while a love-hate relationship develops between them. A more kindly-hearted sort, Orlando the Clown (Jeremy Renner), Bruno’s cousin, appears on the scene and tries to get Ewa to abscond with him.
The Immigrant has many fine qualities, not least Gray’s characteristically adept portrayal of a community and of relationships between people that are more often defined by what is unsaid than said. The New York of the period is wonderfully recreated, with musty sepia-washed photography from the Franco-Iranian Darius Khondji, a seriously underused cinematographer. Gray and Khondji sprinkle the film with nods to silent melodramas, such as a door surreptitiously closing after witnessing a murder in a hallway and a pursuit, filmed in wide angle, through Central Park and the city’s sewers. For all the film’s technical mastery though, it falls down in the quality of the acting and the writing.

Phoenix, a regular in Gray’s films, acquits himself gainfully, with a much more finely graded performance than the one he gave in The Master; in one scene with Ewa, he conveys powerfully the fearsome violence of the bully with a persecution complex. Cotillard, not the subtlest of actors at the best of times, does well enough for a time – convincingly mouthing a fair amount of Polish dialogue – until you begin to tire of her saying the word ‘monnay’ a little too often. Renner, however, is the main problem, and his character is as much the fault of Gray and co-writer Richard Menello as his own. For a start, Renner is just not convincing as a period character – he has too much of the hokey bonhomie of a 21st-century Rom Com love interest about him. He is also fed some unbelievably banal lines by Gray and Menello – his first words to Ewa on meeting her while performing at Ellis Island are ‘my God, you’re beautiful’ and when he next encounters her back in Manhattan, he advises her to tap Bruno for influence with Immigration before asking her in the next breath how she first met Bruno. There are structural problems with the script too as Orlando, a flimsy cipher, serves only as a vehicle for dramatic friction between Bruno and Ewa. I know the film’s a melodrama but it needn’t be quite so crudely mechanical.

Gray’s straining for realism is consequently questionable given how Renner is so jarring in his role. And why bother with so much Polish if one of those speaking (the Polish-American actress Dagmara Dominczyk) is similarly inclined to sound like she’s a college freshman when she switches to English? Prohibition is also oddly underplayed, given that, a year on from its enactment it would surely have been a feature of everyday life. It is especially frustrating as James Gray’s last two films We Own the Night and Two Lovers are among the finest American movies of recent times. He films New York with the same kind of verve and sensitivity as Martin Scorsese is no longer capable of mustering. The Immigrant might be a more creditable effort than Scorsese’s preposterous Gangs of New York but it is a major disappointment, one whose emotional potential is smothered far too frequently by sloppiness.

Hello Everybody,
My name is Mrs Sharon Sim. I live in singapore and i am a happy woman today? and i told my self that any lender that rescue my family from our poor situation, i will refer any person that is looking for loan to him, he gave me happiness to me and my family, i was in need of a loan of S$250,000.00 to start my life all over as i am a single mother with 3 kids I met this honest and GOD fearing man loan lender that help me with a loan of S$250,000.00 SG. Dollar, he is a GOD fearing man, if you are in need of loan and you will pay back the loan please contact him tell him that is Mrs Sharon, that refer you to him. contact Dr Purva Pius,via email:(urgentloan22@gmail.com) Thank you.