Behind the Candelabra & Fifi Howls from Happiness 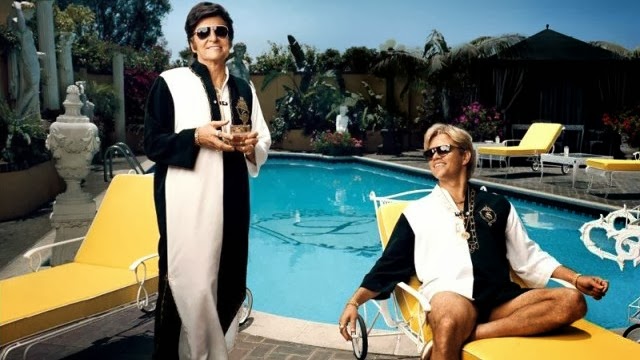 The first I heard of Liberace was the day he died, when I was eleven years old. Within twenty-four hours I knew he was gay and had died of AIDS. And so crumbled the façade he had so assiduously maintained. The star entertainer had successfully cowed media speculation about his sexuality (though, curiously, he only felt the need to resort to suing in the less libel-friendly UK) and many of his fans were none the wiser as to the fact. Almost immediately though his homosexuality became one of the dominant things about his personality among the wider public (to be fair to the man, the attempts to out him were never motivated by emancipatory intent, so you can’t really blame him for hiding it). Another immediate effect of his death was he began to be forgotten. Liberace’s fame relied upon his presence on stage in Las Vegas and on TV holiday specials. He may have produced over forty LPs but not a single one of them lives on as testament to his fame.

Upon hearing Steven Soderbergh was to finish his filmmaking career with a Liberace biopic, I thought ‘oh yeah, Liberace, remember him.’ Like Michael Winterbottom’s recent Paul Raymond film The Look of Love, Behind the Candelabra feels like it has come a couple of decades too late. Soderbergh made the film for HBO – it has been released in cinemas internationally after premiering at Cannes – and, despite suggestions that the studios weren’t prepared to handle such a high-profile gay story, you sense they steered clear of it more because it is about the, well, forgotten Liberace. Besides, though the film is perfectly cinematic, its home is definitely on the small screen.

Behind the Candelabra is based on the memoir of Scott Thorson, Liberace’s former lover, who lived with him for several years in the late 70s and early 80s, before the pianist kicked him out as his drug problem got out of hand. Thorson (Matt Damon) is introduced to Liberace (Michael Douglas) while working as a young animal wrangler (though the film does not have him as young as he supposedly was in real life at the time – 16) and is quickly taken in, working as a chauffeur and assistant to give him something to do. Liberace seems to see more in him than in his other beaux and bizarrely suggests adopting Scott – though this may have been a publicity ploy, given that many of Liberace’s housewife fans came to assume that was their relationship. The strangeness of the demand is compounded by the plastic surgery and general make-over Scott is put through to make him resemble the older man. This backfires however when the surgeon – a wonderfully sleazy Rob Lowe in one of the film’s many casting coups – gets Scott hooked on pills as part of his ‘California diet’. The drug dependent downfall that follows is familiar from many West Coast films set in the era.

Michael Douglas won an Emmy for his portrayal of Liberace and it is hard to argue with that; if the film were eligible for the Oscars he would surely be the hot favourite for Best Actor too. Douglas inhabits Liberace effortlessly, and pulls off a performance that might have proved disastrous with the slightest false move. His Liberace has a clear sense of his impending obsolescence – a failure as a concert pianist, he reinvented himself as a hugely successful entertainer but he cannot even prevent his own brother, who plays under the same name, from chipping away at his fame. He tells Scott that he is so old he remembers the ladies playing the Wurlitzers at movie theatres; he is part of a dying world and his lawyer’s last desperate attempts to alter his death certificate to hide his cause of death are the last hurrah. Damon is quietly effective as Thorson, a man whose drug habits have never gone away – he is currently in prison for parole violation – though his performance is more biopic standard.

Soberbergh’s direction is smooth and slick and the film whips along at a good pace, but as ever with his films there is something clinical about Behind the Candelabra and you miss the sense of ill-manneredness that might have tipped it into the realm of genius. Still, he had the inspired idea of casting Debbie Reynolds as Liberace’s mother, providing a living link with the era that made the man huge. You imagine that, had he not succumbed to AIDS, Liberace might have enjoyed a resurgent fame in the 90s. He would probably have been able to come out of the closet and with both his camp sensibility and the faux-sophistication of the swing era coming back into fashion, he’d have been an even bigger draw than ever. As it stands, Behind the Candelabra is a curiosity, a slice of 20th century ephemera that catches momentarily a time when popular culture thrived on a necessary innocence.

Mitra Farahani’s documentary Fifi Howls from Happiness is another portrait of a gay artist in his final days. The subject is the late Iranian painter and sculptor, Bahman Mohasses, who died in 2010. Farahani, who previously directed a fascinating 2004 documentary, Taboos, on sexual attitudes in Iran, tracked Mohasses down to his hotel suite in Rome, where he has lived in exile for much of the past sixty years. Long out of Iran and his works within the country having been destroyed following the Islamic revolution, Mohasses is sufficiently forgotten by many to be considered a cult figure. Early on, we see wealthy young Iranian diaspora collectors waxing lyrical about his work, in which the influences of Ernst, Magritte and Bacon can be discerned.

Mohasses himself is an engaging, provocative interviewee. He perorates in a semi-reactionary way, being scornful of gay marriage, reproaching the gay rights movement for ‘taking the illicit pleasure’ out of sex – he also claims that he never cruised gay men, but always young Italian guys who had girlfriends. He is also misogynistic, remarking upon the ‘bitch face’ of the Iranian actress Golshifteh Farahani (no relation to the director) on a magazine cover. However contentious he might be though, his gregarious bronchial cackle and his gleeful wit make his every moment on screen compellingly watchable. At one point he mocks the director, saying that in the old Soviet Union, she would have got a medal pinned to her chest by Zhdanov for services to Socialist Realism (Mohasses studied art in Moscow at the very time that Zhdanov was overseeing Stalinist aesthetics).

Farahani’s ‘services to Socialist Realism’ certainly don’t preclude her from playing the international art market, as part of the deal for Mohasses agreeing to do the film is her finding him a commission worth €100,000. Most collectors she calls baulk at the price, saying nothing has been heard of him since the Revolution, but two young Dubai-based brothers are enthusiastic and fly to Rome to meet Mohasses, who immediately plays hardball, demanding 70% payment up front. The episode is framed by Farahani, in voiceover, in reference to the meeting of the young Nicolas Poussin with the older painter Frenhofer in Balzac’s short story ‘The Unknown Masterpiece’. This formal self-consciousness shifts Farahani’s film more into film-essay territory, as do the extracts from Visconti’s The Leopard, a favourite film of Mohasses, and an explicit end-of-an-era reference.

The film ends with Mohasses’ death, though it is not clear if the scene where he shouts in distress, off camera, is that very moment. It is one of the few instances of uncomfortable voyeurism in the film, and reminds you a little of the ailing Nicholas Ray in Wim Wenders’ Nick’s Movie. The painting is unfinished, and instead the young commissioners get to take a selection of the artist’s works he has offered as guarantee. Mohasses’ niece oversees the packing away of the works, including the one which gives the film its title, a sunnier version of Munch’s ‘The Scream’ and which was the painter’s own favourite of his works. As the movers wrap the tableaux up and slide them into crates, you have the sense of the great art movements of the twentieth century being put to rest, of abstract canvases finally yielding to conceptualism and gimmickry. Mohasses was already someone who had the stamp of yesteryear about him, a man thoroughly imbued with the hope and certainties of the post-war art boom, now largely forgotten. This fine documentary will hopefully go some of the way towards keeping his memory alive, both in his native country and abroad.