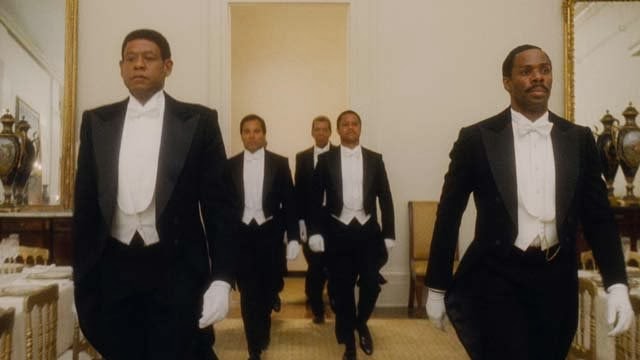 Lee Daniels’ film à clef about the life of White House butler Cecil Gaines carries few surprises and, after the catastrophe of the inept Southern burlesque The Paperboy, that is no bad thing. The Butler is conventional to a fault and probably does too much to hold its audience’s hand – the rape of Gaines’ mother and murder of his father by a brutish plantation owner did not happen to Eugene Allen, whom the film is based on, and is a rather clunky sublimation of the legacy of slavery – but much of the film is admirably done and, though sentimental, you are rarely left feeling cheated.

Forrest Whitaker plays Gaines, a man who stumbles into service through the concerned paternal racism of his childhood employer Annabeth Westfall (Vanessa Redgrave), and who, after moving north, works his way into the White House via a Capitol Hill hotel. Gaines is pleasant and jovial but he quickly learns to be discreet as he adapts to his job in the company of a pair of cynical house staff (Cuba Gooding Jr and Lenny Kravitz). We see a succession of presidents and first ladies, who are portrayed with varying degrees of success by name actors: a painterly Eisenhower (Robin Williams), a beaming John and Jackie Kennedy (James Marsden and Minka Kelly), LBJ (Liev Schrieber) barking orders to his aides while sitting on the shitter, a fantastically shifty Nixon (John Cusack) and a solicitous Ronald and Nancy Reagan (Alan Rickman and Jane Fonda). For some reason Gerald Ford and Jimmy Carter are passed over, but it is Reagan’s decision to veto Congressional sanctions on Apartheid South Africa that finally prompt Cecil to quit after almost four decades of service.

What goes on in the Gaines house is more interesting though. The life of middle-class black Americans is one we seldom see in Hollywood films, for whom black life must always be a litany of drug-and-crime-tinged misery. Oprah Winfrey, making one of her rare screen appearances, plays Cecil’s alcoholic wife, Gloria. Once you get over the weirdness of Oprah playing someone else, you realise how great an actress she is. Gloria is a sharp-tongued, world-weary lady who struggles with the booze as her husband spends long hours at work, and one son (Elijah Kelly) heads off to Vietnam while the other (David Oyelowo) flirts with the Black Panthers. Louis’ drift from civil rights advocate to the Panthers is another invention of the film and it is clearly contrived to reassure mainstream audiences (he soon breaks with them and becomes a lefty Democratic politician). The film is unabashedly pro-Obama and the film ends with Cecil invited back to the White House to meet the current president, as happened with Eugene Allen in real life.

The Butler is an undemanding enough of a film, and is a bit too beholden to the current Hollywood fondness for grand narratives of origin and accomplishment. But it is hard to find major fault with it – the acting is good throughout (Whitaker in particular) and it’s handsomely mounted, with excellent music by the Portuguese composer Rodrigo Leão. One can sense a raft of Oscar nominations awaiting – it’s really that sort of film – but I wouldn’t begrudge it its moment in the sun, even if it is a film that is unlikely to be remembered for long after.


Hollywood ventures into vulgar Marxism once again with Neill Blomkamp’s futuristic utopia/dystopia follow-up to the surprise sci-fi hit District 9. The year is 2154 and the great and the good have long given up on Earth, wracked by pollution, environmental catastrophe and crime. The rich have decamped to Elysium, a habitable sealed-atmosphere space-station that looks like the one in 2001: A Space Odyssey and which is lovingly landscaped with manicured lawns and the sort of aseptic neo-classical architecture that the American moneyed classes imagine to be the acme of good taste. It’s not unlike the hermetic, tax-free paradises advocated by Silicon Valley libertarians such as Peter Thiel, and William Fichtner, who plays John Carlyle, the villainous military systems CEO in cahoots with Elysian Secretary of Defence Jessica Delacourt (Jodie Foster), even resembles Thiel in appearance.

Back on Earth, Elysium is a dream for the desperate multitudes, not least because of the existence there of incubation technology that will cure all ills. Julio, a Mexican people-trafficker (Diego Luna) runs regular excursions up, but most are intercepted with extreme prejudice by Elysian defence forces. One particular destruction of two vessels containing hopeful emigrants is disturbing for the insouciance with which Blomkamp films it, which is the first time you begin to question the sincerity of the film’s political line. Max da Costa (Matt Damon), a former car thief out on parole, is one of Carlyle’s employees and he is exposed to a lethal dose of radiation that leaves him only five days to get to Elysium for the all-important medical treatment. To pay his way, he takes on a job with Julio where he will hi-jack Carlyle’s pod on the way to Elysium and steal valuable data. Little do either Julio or Max know that the encrypted data is intended to override Elysium’s operating system and allow Delacourt seize power. Meanwhile, Frey (Alice Braga), an orphanage friend of Max, needs to get to Elysium to get her daughter cured of her terminal leukaemia.

Delacourt has set vicious mercenary Kruger (Sharlto Copley, from District 9) on Max to retrieve the data. Kruger is the best thing by far in the film, a monstrous apocalyptic colossus who is at once absurd and terrifying. He also turns out to be highly volatile and untrustworthy. Foster as Delacourt is where Elysium goes badly wrong. Though I have always thought her an overrated actor, it is surprising how awful Jodie Foster is in this role, a bizarre amalgam of Christine Lagarde and Donald Rumsfeld. It’s all shoulder pads and cold stares and not the stuff of formidable villains. The denouement of Elysium is routine stuff and, like with District 9 before it, Blomkamp has by then long dispensed with any effort at political analogy or serious social commentary. Still, it is enjoyable enough and is thankfully devoid of the pretentiousness which is such a common feature of such films. A diverting two hours.