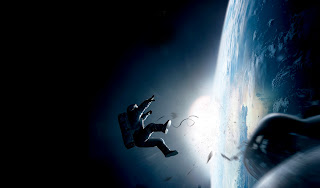 In Tom McCarthy’s 2005 novel Remainder, the hero, who is re-enacting in painstaking detail events from his life, expresses repeatedly his frustration at not being able to get a fridge door to open and close like in the movies – the door always catches, unlike the smoothness with which, say Robert de Niro, negotiates it on screen. This is because the movies – Hollywood ones in particular – don’t do mistakes. The inconveniences of life are airbrushed out of the diegetic reality of film – characters are able to get parking spaces right in front of buildings, they survive improbably long despite losing lots of blood after getting shot and they never wait for change in shops or restaurants.

Gravity is an unusual film then in that its drama stems almost entirely from a single mistake – the film might even be subtitled ‘Anatomy of an Error’. In Alfonso Cuarón’s new movie, things go wrong – many things go wrong, one after another. Three NASA astronauts are doing routine maintenance on their space station when they are informed by Houston that debris from an exploded Russian satellite is heading their way at high speed. Shuttle pilot Matt Kowalski (George Clooney) instructs engineer Ryan Stone (Sandra Bullock) to detach herself from her post but Stone dallies. They end up getting hit by the first blast of the debris, which pierces the space station, destroying it, and killing three of the crew. Stone and Kowalski then have to make their way to one of three neighbouring space stations, in the hope of getting a shuttle back to Earth but, their peregrinations being knocked out of step, things are immediately more complicated.

Though Gravity has been praised for its realism by astronauts, including Buzz Aldrin, and the recreation of Earth’s orbit is hugely impressive, it is, I think, only incidentally a film about space. It seems to me to be more about the fragility of human existence, the abruptness with which lives end, the difference between life and death being often a misplaced foot or coming loose from one’s moorings, or not coming loose from them. This is what makes it such a thrilling, yet terrifying experience throughout. You have a wearying sense of mortality, of physical danger, even if the circumstances Stone and Kowalski find themselves in are hardly commonplace. In its spatial organisation, Gravity feels more like a Western than a traditional sci-fi film; the catastrophe befallen the astronauts resembles the march through the desert of John Ford’s 3 Godfathers or the travails of the desperate pioneer-prospectors of the recent films Meek’s Cut-Off and Gold. There is also the echo of a road-movie in Kowalski’s name, surely a reference to the lately departed Richard C. Sarafian’s Vanishing Point, as well as the Country and Western music that he plays in space, much to the annoyance of Stone.

Gravity works as an unusually sophisticated mainstream film, imbued with an acute existential frisson, because it is so simple. It is stripped down, a two-hander with two actors unencumbered by showiness. While Clooney may be a little too noticeably Clooney to fully inhabit an astronaut’s burnished anonymity, he does the job well enough; Bullock, on the other hand, an actor whose very ordinariness is the most remarkable thing about her, is perfect as Stone, the hospital systems engineer who ended up in Space following the sudden death of her four-year-old daughter. She looks just like the steely resilient soccer moms that beam out of their oversized spacesuits in official NASA portraits. Stone is someone for whom mistakes have come to be expected – she says she crashed the spacecraft every time in the Simulator – but now she has to unlearn that habit to survive. It is a testimony to the assuredness of Cuarón’s direction – a man who, it must be said, is a cerebral journeyman rather than a fully-fledged auteur – that Stone’s narrative of self-realisation is integrated into the film without appearing cheesy or maudlin. Gravity is a rare film, of any provenance, that is ineffably physical and visual while also giving the mind something to chew over. There will be few Hollywood films this year – this decade even – that are as good as it.

Nice review Oliver. Totally worth the watch, especially on the big screen if at all possible.