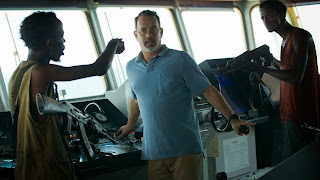 ‘No Al Qaeda’, say the Somali pirates in Paul Greengrass’ Captain Phillips; their intentions are purely ‘business’-related. Greengrass and his screenwriter are similarly eager for his film not to be mistaken for a Manichean neo-con blockbuster. We see the pirates – impecunious fishermen all – gather on the beach early in the film to await selection for the next raid. Their grievances are made clear throughout and the titular Captain Richard Phillips mumbles at one point while in their captivity that ‘surely there can be more for them to do than piracy or fishing’. It’s a little like ‘why can’t we all just get along’ crossed with ‘let them eat cake’. Greengrass has, along with Steven Soderbergh and others, pioneered the conscientious international thriller, a genre that sprouted in the early days of the Bush administration, as American liberals scrambled to put as much daylight as possible between themselves and their internationally unpopular president. With films like Syriana and Greengrass’ United 93, it became possible for fans of high-octane action films to get their adrenaline rush while retaining a pious sense of their righteousness à la différence de the rapacious warmonger heading their country.

Captain Phillips is based on the memoir of the captain of the MV Maersk Alabama, a cargo ship that was hijacked in international waters on its way from Oman to Mombasa in 2009. It was the first US ship to be taken in over two centuries – it is not surprising then that the Somali pirates led by ‘Bag of Bones’ Muse (Barkhad Abdi) are so excited at hitting the jackpot in bringing such a behemoth to heel. This film comes soon after Tobias Lindholm’s A Hijacking, a film it is pointless to compare this one to as the circumstances of each hijacking were so clearly different to one another (though, not, as lazy critics might point out, because Lindholm’s approach is more ‘art house’ or ‘European’ – his film is firmly in the Hollywood mould but without the military hardware to fall back upon). It has to be said though that Captain Phillips is a more efficient thriller, with Greengrass maintaining a swift even pace throughout and he neatly resolves the logistical conundrums that the hijacking’s timeline throws up. He is also as adept at filming quiet moments as he is the flashier, more elaborate set-pieces. The dénouement is every bit as riveting, in a different way, as Lindholm’s was, and a scene where a traumatised Hanks is treated by a military doctor is a masterpiece of observational drama. Moreover, in an age when many Hollywood films are catastrophically over-long, Captain Phillips justifies its two-and-a-quarter-hour running time and never flags.

The big problem with it however is it cannot escape the socio-political paradigm it clearly wants to have no part of. Though Greengrass and Ray go to lengths to show the Somalis’ side of the story,  using ample amounts of Somali dialogue and furnishing us with back story on the pirates’ reasons, the commercial constraints of the Hollywood blockbuster forbid too much empathy. It might be permissible to use a cast of unknowns (another familiar Greengrass practice) but there is no way you can reverse the perspective and show the event from the Somali point of view. If Greengrass wanted to make a truly sincere and radical film, he would have started it on the beaches of Somalia and not in the Vermont countryside, as Phillips makes his preparations to head off to the Persian Gulf. The film would follow the pirates as their skiff catches up with the Alabama and the Somalis board it, it would be with them as their plans unravel.

Such an approach wouldn’t mean a capitulation to lawlessness nor would it be affirming the justice of the pirates’ cause or even downplaying the US crew’s genuinely terrible experience. It would however upset the dynamics of the Western action film, where the technological infrastructure is so clearly weighed in favour of one side (it is only in improbably Die Hard-esque scenarios where this imbalance is temporarily redressed). It would be a genuinely unsettling and challenging experience for a Western audience to watch. Of course, Hollywood is never going to go down that route. Captain Phillips, after paying its dialectical respects to the predicament of the desperate Somalis, calls in the Navy Seals, just as Washington did in real life. There might not be any Al Qaeda in the film, as the hijackers like to point out, but Captain Phillips is ultimately as dutiful a paean to American military might as Zero Dark Thirty, however horrifying that might be to right-thinking liberals like Greengrass.