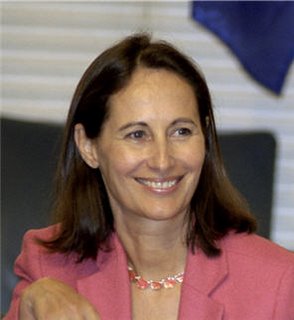 The French Socialist Party has seen sense and elected Ségolène Royale to contest the Presidential election next year, the only realistic option to prevent Nicolas Sarkozy's march on the Elysée Palace. I am not going to sing the praises of Ségo - in any other circumstances I would probably be anything but enthusiastic about her - but she is a formidable politician and possessed of sufficient charisma to make a President that the French will be proud of and unite behind. Her candidature provoked some shocking sexism within the Socialist Party, such as Mitterand lackey Jack Lang muttering "who's going to mind the children?" but Royale has the support even of young suburban immigrants. That might be because, like me, they want anyone but Sarkozy, but I think they also appreciate her struggle against the ingrained consensus of the French establishment. Of course, Ségo, bourgeoise and ENA graduate, is fully as part of the establishment as any of her political opponents but she also represents genuine change. And she will probably usher in the much-needed economic shock treatment without alienating everybody. This is one of the first genuine causes for optimism in France in quite some time.
Posted by Unknown