Lightness In The Dusk 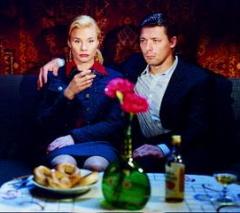 There are few film directors that master such a consistency of tone as Aki Kaurismäki. The Finn has, over a career of twenty years produced a string of films, at once hyper-stylised and grimily realist that assume effortlessly the same register every time, be they deadpan comedies such as the Leningrad Cowboys movies, the London-set I Hired a Contract Killer or his masterpiece, the 1996 film Drifting Clouds, one of the most moving films I have ever seen. The perfection of Drifting Clouds was detailed in its beautiful final shot and the presence, in the form of a childhood photograph, of Kaurismäki's longtime leading man and close friend Matti Pelonpää, recently deceased, as the dead child of the couple in the film.

Kaurismäki returns with Lights in the Dusk (or, much better, in French, Les Lumières du faubourg - the suburban lights), a film about a hapless night-watchman with plans to start up his own business and his entrapment by a femme fatale in the pay of a criminal gang, who are plotting the heist of a jewellery store on his watch. Kaurismäki has famously declared his preference for ugly actors because they are dramatically more interesting, though his collaborators here, Janne Hyytiäinen, as Köstinen, the taciturn and endlessly optimistic security guard and Maria Järvenhelmi as Mirja, the woman by whom he is ensnared, are like Brad and Angelina compared to the actors he normally uses.

Kaurismäki does not worry too much about scrupulous accuracy in his portrayal of day-to-day life; his characters smoke an improbably huge amount everywhere, work and at the cinema included, but he is more faithful to the emotions of people, particularly those on the receiving end of harsh blows in life. For all the mannerisms of the actors the situations ring true, and the humanistic concerns of the little man and his looking-out for others, even in the face of crushing setbacks is as prevalent as ever. As the title indicates there is a clear homage to the Chaplin of City Lights being paid here (and the French title is all the better with this in mind) and Kaurismäki provides a recurring shot of traffic flowing in and out of a bland suburban artery of Helsinki, an image that is both haunting and evocative of lives passing in stolid passivity, like the lives of his characters. For a film that is unremittingly bleak in its subject matter, Lights in the Dusk, possesses a gentle touch that belies the roughness of life for its protagonists. Life might be ugly for Kaurismäki's characters but their dignity is 100% intact.

Kaurismäki is a particularly admirable man himself, having progressed to filmmaking via a number of unglamorous jobs such as postman and, like Köstinen in the film, dishwasher. He has enjoyed a fair degree of commercial success both in Finland and abroad though when he had the opportunity to adapt Juhani Aho's Juha, one of the key texts of Finnish literature, he did so by filming it as a silent black-and-white film. It may have been seen by few people but it was memorable for those of us that saw it. A measure of the man's grace can be gained from his reaction a few years back to the refusal of a visa by US immigration to the Iranian director Abbas Kiarostami - possibly the greatest filmmaker alive - by himself refusing to attend the New York Film Festival, where his last film The Man Without a Past was been shown. His reasoning? "Well, if they don't want an Iranian, they'll hardly miss a Finn." Fantastically down-to-earth. The Finns are proud of Kaurismäki and well they might be.
Posted by Unknown