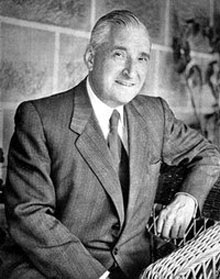 Portugal is the latest country to hold a TV straw-poll for its greatest national of all time, and the Portuguese plumped for former fascist dictator Antonio de Oliveira Salazar, who had a 36-year innings ruling the Lusitanian republic with an iron fist (though he was somehow persuaded for the last two years of his life, following a stroke, that he was still ruling the country from his bed). 160,000 viewers took part and, according to The Guardian, the old fascist took 41% of the vote though, as one comment on their blog puts it 'this only shows that Portuguese fascists love to make phone calls to stupid TV shows.. Eurovision is coming folks ;)'. Couldn't have put it better myself. Oh, for the glory days of Portugal. Salazar's ideological rival, Communist leader, Alvaro Cunhal, came second while third was the more middle-of-the-road diplomat Aristides de Sousa Mendes, a sort of Portuguese Oskar Schindler or Raoul Wallenberg, who directed thousands of German Jews to safety via Portugal, against the orders of Salazar himself. I suppose that this poll doesn't really show anything at all, then. Except maybe that fascists have better telecommunication packages.
Posted by Unknown