The Return of Lars von Trier 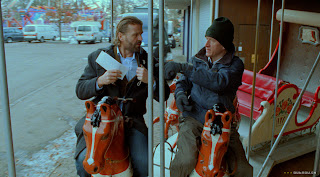 There are many contemporary filmmakers that I admire but there are few that are as consistently brilliant as the Dane Lars Von Trier. He started off in the 1980s with a string of interesting though ultimately dull films such as The Element of Crime and Europa, and it was only with his mid-nineties TV series The Kingdom that he came into remarkable form, which has continued ever since, with Breaking the Waves, The Idiots, Dancer in the Dark, and Dogville. Only the second part of the Dogville trilogy, Manderlay has proven to be a disappointment. Von Trier is disliked by many, and has been ever since his earliest days as a film student; the aristocratic partitive 'von' dates from a nickname given to him because of his pompousness back in the early 80s. His modus operandi is provocation though on a highly complex, conceptual scale. He is vilified for misogyny, especially in Breaking the Waves, though that film is more an examination of how good people bend over backwards to accommodate the wishes of those around them, at great risk to themselves. Saintliness is the matter of the film and it is not pleasant to watch. Once von Trier realised that he could get such a reaction from his portrayal of women, he has since regularly tortured saintly female leads, most famously Björk in Dancer in the Dark and Nicole Kidman in Dogville. And the Dogville trilogy has of course riled many Americans as it is a work ostensibly examining American society, even though von Trier has never set foot in the country. This is the greatest dummy that he has sold though few people realise it. As with most of his films, von Trier, in Dogville diagnosed the willingness of people to close their minds according to political convenience. In this way he is similar to the Brecht of The Resistible Rise of Arturo Ui (another American-set work written by somebody who had never at the time visited the country). The greatest villain in Dogville is the Clintonian liberal, Thomas Edison (played by Paul Bettany) who compromises himself again and again without ever renouncing his actual convictions. The narrative of Dogville is a masterpiece of withering rhetorical irony. Though it might be argued that von Trier's endemic misanthropy sometimes swings too close to nihilism, there is usually ballast enough to allow his Swiftian outrage to ring true.

The method of von Trier was best exemplified in his film of a couple of years back The Five Obstructions, where he tormented one of his heroes, the Danish filmmaker and writer Jorgen Leth, by instructing him to remake his short film The Perfect Human, a number of times with a different constraint each time. The film shows von Trier up to being an impish prick, intent on breaking any rule of decency in order to get his desired result. A humanist he certainly is not but there is something breathtaking in both the depth of his method and the roughness of his finished work; his films are masterpieces but usually roughly-hewn ones.

Latest up from von Trier is The Boss of it All, a Danish-language, Copenhagen-set film about the trendy owner of an IT company who has always hidden his real ownership of the company from his employees, and who hires an unemployed actor to do the dirty work and lay off those same workers when the time comes to sell the company. Not surprisingly the unfortunate actor, played by Jens Albinus, who was one of the principles in The Idiots, is subjected to the worst abuse by the disgruntled workers. But there are a number of twists effected by the devilish von Trier, which once again displays his interest in the tendency of people to submit themselves unthinkingly to a prevailing truth. Ever the master of the red herring (this is after all, the man who concocted the Dogme hype just to facilitate his own part in it, namely The Idiots, which remains the only indisputably great film to be made under the Dogme strictures) von Trier apologises throughout for the modesty of his enterprise, as if it were one of those 'entertainments' that Graham Greene used to alternate his more serious works with. But we know better than that; everything that takes place onscreen is of the utmost serious, even when it provokes laughter, and much of it is very funny.

I also saw Richard Eyre's Notes on a Scandal, an adaptation of Zoe Heller's novel, which I had a bad feeling about, expecting it to be the standard TV film offered up by a British filmmaker. But I was pleasantly surprised by this difficult, distasteful film, if that is not all a bit too contradictory to absorb. Cate Blanchett, who Seanachie has been slagging off a bit of late, mainly because of her performance in The Good German is excellent as the teacher who has a fling with one of her teenage students and Judi Dench's performance as the lonely, deluded older teacher, is astounding, disturbing and sad in equal amounts. A lot of people will recognise bits of themselves in her, which is a von Trieresque achievement in itself.