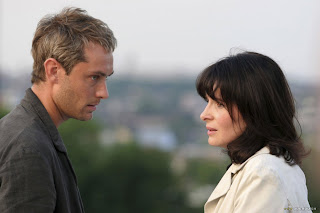 I've always had a soft spot for Anthony Minghella, ever since ten years ago, in my college finals for my Literature and Imperialism exam, I managed to somehow work an essay about his recently garlanded film of Michael Ondaatje's The English Patient into the game. That film was far from being what one could truthfully call good but it did have a soothing middlebrow quality about it that made even perennial cynics such as myself admire it nonetheless. It is such a graceful abortion of a fine literary text, such a gormless paean to the lost glories of aristocratic ethnography that it is hard not to like it as, well, 'something different'.

It matters not that Minghella has never made a good film, not is ever likely to; it doesn't matter that he tore the life and soul out of Patricia Highsmith in The Talented Mr. Ripley - a feat as extraordinary as translating Hamlet into Arabic whilst maintaining both the metre and the rhyme - nor does it matter that Cold Mountain was scarcely watchable in its risible hotch-potch of fake Southern accents and sentimental whimsy. One part of my subconscious always tells me that 'Anthony's OK, he's with me', and when I turned up at the MK2 in Bastille the other night to find Olivier Dahan's Edith Piaf biopic La Môme sold out I was not entirely distraught to learn that the only other option left was Minghella's new opus Breaking and Entering.

Minghella's third successive partnership with Jude Law - a man who is surely and sadly pricing himself out of the market for his rightful place in Sunday night ITV drama - the film tells the story of an idealistic young architect - played by Law - who sets up shop at King's Cross, only to get his premises broken into repeatedly by a young Bosnian refugee who is a dab hand at Parkour, the building jumping invented by a bunch of French teenagers back in the 1980s. His relationship with longtime Swedish partner - played by Robin Wright Penn, her cheekbones seemingly elevated a couple of inches for the part - is under strain as Penn's autistic daughter begins to display symptoms that can only be a godsend to writers of contrived domestic dramas. There is also an Eastern European crack-whore with a heart of gold whom Law manages not to shag, Juliette Binoche playing the Bosnian Muslim mother of the young thief who has an affair with Law ('Vee survived' she pipes at one point in an accent that if credible only reinforces the absurdity of Binoche in the role). And then there's Martin Freeman - finally free of Wernham Hogg - as Law's business partner who does as little work in the atelier as Law himself does, and Ray Winstone as a loquacious, world-weary, philosophising cop. If that sounds terrible, well it is, and not even the unintentionally hilarious scene where Binoche writhes in pleasure as Law's tongue (or possibly his nose - it's offscreen) lifts her up where she belongs, bringing to mind Alan Partridge's famous comment: 'textbook sexual intercourse', can bring it any lower.

But this is an Anthony Minghella film and absurdity and lack of rational thought are no barriers to entertainment, and I was perfectly happy to remain gripped to my seat for the entire duration of the film. As I said, there is no room for rational thought in the film so I think I might be spared that necessity too. The film ends swaddled in typical implausibility, its pseudo-realism reminding me of Richard E. Grant's avowal in Robert Altman's The Player that 'this is real life'. This is a film that will do huge amounts of trade on DVD, and I can't say I begrudge it that, as I would probably watch it again given the opportunity (there is something vaguely pornographic about the impulsiveness it induces). Hell, I'm even thinking that Minghella's Hollywood remake of German Oscar-winner The Life of Others will be a bit of a hoot. 'Vee vill survive,' as Binoche might say.
Posted by Unknown